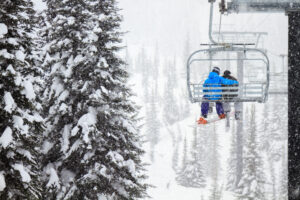 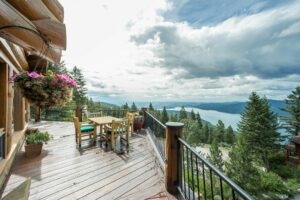 Whitefish, Montana rests at the northern end of the picturesque Flathead Valley of northwestern Montana. It lies on the western slope of the Continental Divide at an elevation of 3,028 feet. A year-round recreational haven, Whitefish boasts a world-renowned ski-resort, a large natural lake with a public beach area and northwest Montana’s only 36-hole golf course.

Whitefish is a transportation hub for the Burlington Northern Santa Fe Railroad and Amtrak trains. The Whitefish Depot boasts being the busiest train stop between Minneapolis and Seattle.  Whitefish began as a fur trading hub and later the railroad and logging industries helped it flourish. Today the economy relies heavily on tourism.

Skiing has been part of the Whitefish area for many years. In 1937, the Whitefish Lake Ski Club obtained a special permit from the U.S. Forest Service enabling them to build cabins and trails in the Hell Roaring Creek region. Great Falls businesspeople Ed Schenck and George Prentice recognized the area’s potential and, after World War II, began efforts to develop a full-fledged ski resort on the mountain with local people donating labor, preparing the slopes to help push through an all-weather mountain road. On December 14, 1947, Schenck, Prentice, and a thousand townsfolk stood on the newly christened ski resort’s slopes to watch the brand new T-Bar lift bring their community vision to life.

Whether you are looking for a great place to raise a family, run a business, enjoy your retirement or simply take a well-deserved vacation, look no further—Whitefish, Montana has something for everyone!  Nestled at the northernmost tip of the majestic Flathead Valley, Whitefish offers residents a peaceful—yet active—lifestyle that is the envy of communities near and far.

All you have to do is pick your pleasure—from hiking & biking to boating & cycling, from skiing & skating, to floating and fishing… you’ll find all that (and more!) in Whitefish.

For things to do and see in Whitefish, click here.