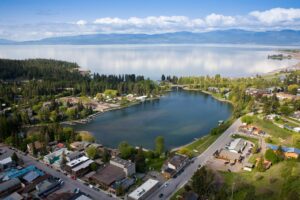 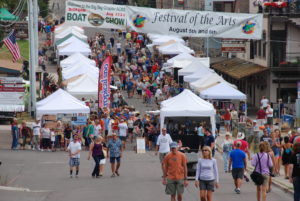 The Bigfork area is nearly 2,900 feet above sea level. The beautiful village of Bigfork is situated along a sparkling bay where the wild, white waters of the Swan River run into Flathead Lake. For its location, Bigfork and The Flathead Valley have a relatively mild climate and can best be described as an area of climatic transition between coastal and continental. With more than 180 miles of shoreline, Flathead Lake is the largest natural freshwater lake west of the Mississippi, providing visitors a playground for fishing, boating and all varieties of water sports. Bigfork’s year-round resident population is approximately 5,100.

Bigfork has a way of capturing the imagination and stealing hearts, and yet it means something different to everyone. Some come for the untouched wilderness and wildlife. Others want to experience the culture of the old west. And still others just want to sit by a fire, disconnect from the world, and reconnect to themselves. Bigfork isn’t just a Montana lakeside resort, a nature-lover’s paradise or a quaint, western stage-stop. It’s all these things and more in one unforgettable place.  Whatever Montana you dream of,  you’ll find more of it in Bigfork.

How Bigfork came to be

It’s easy to understand why our town’s founder, a young Everit L. Sliter, fell in love with Bigfork when he first arrived for a hunting and fishing trip in 1889. Like many of today’s residents, Sliter was awed by the vastness of Flathead Lake, the rolling Swan and Flathead Rivers that feed it, and the majestic mountains that cradle Bigfork like a precious jewel.

By 1894, Sliter had relocated his family from his native Michigan and purchased nearly 140 acres in Bigfork, where he planted one of the largest orchards in the valley. Sliter went on to build an estate, which included Bigfork’s first hotel rooms, and a post office. His vision laid the groundwork for future development and helped establish the Bigfork we know today.

The natural surroundings that made a Montanan out of Everit Sliter are still just as awe-inspiring, and our little town of Bigfork is still one of Flathead Valley’s most beautiful places. Many of the places you can visit today have ties to Bigfork’s historic past, including Eva Gates Preserves, which was founded in 1949, Bigfork Center for the Performing Arts, which has been a Bigfork institution for over 50 years, the Bigfork Inn, which was first opened as a hotel in 1910 and now serves as a family friendly restaurant and meeting place, and of course the old steel bridge that was built in 1911 to replace a wooden bridge that had spanned the Swan River since 1900.

For things to do and see in Bigfork, click here.